BACK TO “COLD WAR” 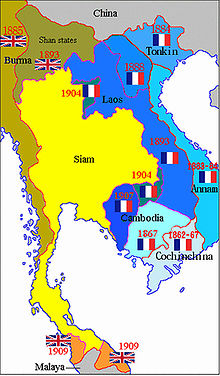 1946-1954: The First Indochina War (generally known as the “Indochina War”) between French forces and their Việt Minh (communist) opponents has lasted from 1946 to 1954 in French Indochina.

France obtained control over northern Vietnam (as a colony) following its victory over China at the end of the 19thC. During World War II, Japan invaded and occupied Vietnam  (eastern edge of the Indochina Peninsula). Inspired by Chinese and Soviet communisms, Ho Chi Minh formed the Viet Minh (Vietnamese communist party) to fight both Japan and the French colonial administration. Japan withdrew its forces in 1945. The United States had supp

orted the communist Viet Minh in resistance against Japan and American President Roosevelt, privately made it adamantly clear that the French were not to reacquire French Indochina after the war was over!

But France was seeking to regain control of the region, and backed the French-educated Emperor Bao Dai to set up the state of Vietnam (South Vietnam) in 1949, with Saigon as its capital.

Armed conflict continued until a decisive battle at Dien Bien Phu in 1954 ended in French defeat by Viet Minh forces.

The subsequent Geneva Conference that year split Vietnam along the latitude known as the 17th parallel dividing between  the North and the South) and called for nationwide elections for reunification to be held in 1956.

The failure to hold reunification elections would eventually lead to war breaking out again, this time with US intervention. Due to the “Truman doctrine” (to prohibit any expansion of communism), the US cut their support to communist Vietminh against the French and the Japanese, and supported South Vietnam (after the French left) against the communist North who wanted an end to all foreign occupation of their country: the “Vietnam War” (or the SECOND Indochina War.)

More at French Withdrawal from Indochina

It was started by the Communist guerrillas (Việt Minh now derisively called Vietcong or “Vietnamese Communist”) in the South, who were backed by Communist North Vietnam, in an attempt to overthrow the South Vietnam government. With the Cold War intensifying, the United States hardened its policies against any allies of the Soviet Union, and by 1955 US President Dwight D. Eisenhower had pledged his firm support to South Vietnam.

The “Truman doctrine” and the “domino theory”

The “domino theory,” held that if one Southeast Asian country fell to communism, many would follow.

Working under this doctrine, the new US President JF Kennedy (1960-63)  increased U.S. aid (but no large-scale military intervention): the amount of aid and the number of ‘military advisers’ rose from 900 to 11,000. 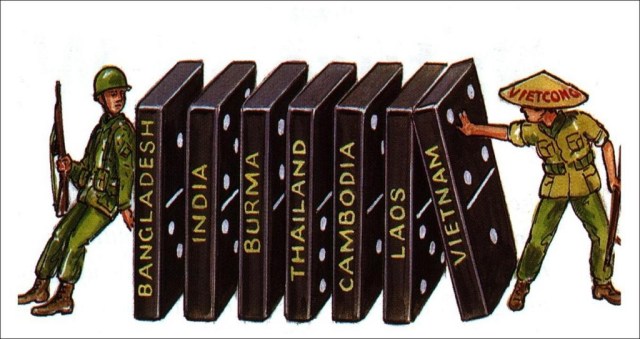 1954-60: American progressive involvement
Until the 1954 French defeat by Viet Minh forces, the USA supported the French against the Viet Minh with money and equipment. After the French left in 1954, the US  sent aid, equipment and military advisers to South Vietnam until 1960.

In 1963, a coup d’etat  in South Vietnam by some generals succeeded in toppling and killing Diem and his brother causing political confusion. Three weeks later US president JF Kennedy was assassinated in Dallas, Texas. (See JFK assassination conspiracy theories) 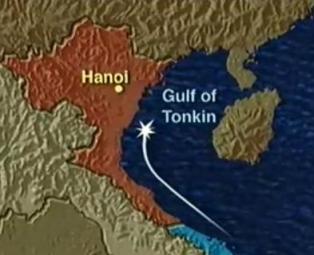 After this incident US President Lyndon Johnson’s decision to bomb military targets in North Vietnam received overwhelming backing from US Congress and the Senate in what was known as the ‘Gulf of Tonkin Resolution’. The resolution authorised the President to take ALL necessary measures against North Vietnam.

Problem: There is no evidence the “Tonkin Incident” did happen. Journalists and historians found that no North Vietnamese boats were in the area of the Gulf of Tonkin that night… See: Records Show Doubts on ’64 Vietnam Crisis (New York Times)

By 1965, the US President Lyndon Johnson approved regular bombing of North Vietnam to prevent the total collapse of the Saigon regime by the dispatch of troops and marking their overt entry into the war. 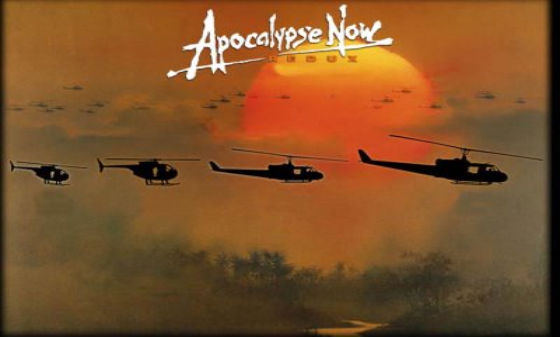 Immortalized in the film, Apocalypse Now, the Vietnam War was the birthplace of the modern attack helicopter, and it would change the way wars would be fought forever. With the battle lines not clearly drawn U.S. forces on the ground implemented a series of “Search and Destroy” missions to carry the fight to the enemy. The helicopters were used to hunt down enemy positions and eliminate them so U.S. ground forces could overrun their position. Whole squadrons of attack helicopters were used to precede any large-scale ground operations to “soften” any hardened ground resistance. Helicopters were also extensively used for search and rescue missions, medivac, and troop transport throughout the campaign. The success of the attack helicopters during the Vietnam War set the stage for future conflicts and how ground operations were conducted. The Cobra helicopter is still in use today and was an integral part of the Allied war effort in OPERATION DESERT STORM in 1991.

Napalm is a mixture of plastic polystyrene, hydrocarbon benzene, and gasoline. This mixture creates a jelly-like substance that, when ignited, sticks to practically anything and burns up to ten minutes.

The iconic black-and-white image. It communicated the horrors of the Vietnam War in a way words could never describe, helping to end one of the most divisive wars in American history.

Story of that photograph at I’ve never escaped from that moment: Girl in napalm photograph that defined the Vietnam War 40 years on

The effects of napalm on the human body are unbearably painful and almost always cause death among its victims. “Napalm is the most terrible pain you can ever imagine” said Kim Phúc, a survivor from a napalm bombing. “Water boils at 212°F. Napalm generates temperatures 1,500°F to 2,200°F.”

Kim Phuc (the “Napalm girl” shows her scars from napalm.

Napalm was first used in “flamethrowers” for U.S. ground troops; they burned down sections of forest and bushes in hopes of eliminating any enemy guerrilla fighters. Later on in the war B-52 Bombers began dropping napalm bombs and other incendiary explosives. Throughout the duration of the war, eight million tons of bombs were dropped over Vietnam; this was more than three times the amount used in WWII.

1968: peak of the Vietnam War Protests

The movement against U.S. involvement in the Vietnam War began small–among peace activists and leftist intellectuals on college campuses–but gained national prominence in 1965, after the United States began bombing North Vietnam in earnest. Anti-war marches and other protests attracted a widening base of support over the next three years, peaking in early 1968 after the successful Tet Offensive by North Vietnamese troops proved that war’s end was nowhere in sight.

The war became more and more unpopular in the USA for several reasons:

By mid-1968, Americans have been stunned by Vietcong military opposition during the Tet offensive, and grown weary of the steady stream of body bags coming home, asking whether the war is winnable. That year, the presidential campaign becomes a referendum on the war. President Johnson drops the bombshell that he will not seek re-election (Richard Nixon, chief spokesman for the silent majority, won the election that fall.) Martin Luther King Jr. and Bobby Kennedy (brother of JFK), the two most visible leftists in American politics, were assassinated. Police used tear gas and billy clubs to break up protests. Furious antiwar protestors took over Columbia University in New York as well as the Sorbonne in Paris and the Free University in Berlin. And the urban riots that had erupted across the country every summer since 1964 continued and intensified.

This contributed to the worldwide Student Revolts of 1968.

The antiwar protests and the civil rights movement

“A time comes when silence is betrayal, and that time has come for us in relation to Vietnam.”
—Rev. Martin Luther King, Jr.

The war in Vietnam provided a backdrop for race and racism that grew out of a long history of European and U.S. colonialism in Asia.

The early opposition to the Vietnam War was largely restricted to pacifists and leftists empowered by the successful application of strategic nonviolent action in the U.S. Civil Rights Movement.

Martin Luther King, who has been awarded in 1964 a Nobel Peace Prize, draws criticism by publicly speaking against the war. “The promises of the great society have been shot down on the battlefields of Vietnam,” he says, “making the poor, white and Negro, bear the heaviest burden both at the front and at home.”
King’s stance creates a rift with President Lyndon Johnson. The FBI is already monitoring King and seeking ways to discredit him, particularly by linking him with Communists. Although King’s views will affect his public image, the tide is turning.

There was a protest at the Mexican Olympics in 1968…

Two African American athletes raised their fists in a “Black Power” salute on the winners’ podium. It was an iconic moment — but they were expelled from the US team.

In 1969, the newly elected US President Nixon (1969-74) Nixon sought to deflate the antiwar movement by appealing to a “silent majority” of Americans who he believed supported the war effort. In an attempt to limit the volume of American casualties, he announced a program of withdrawing troops, increasing aerial and artillery bombardment and giving South Vietnamese control over ground operations; a policy which he called “Vietnamization.”

The next few years would bring even more carnage, including the horrifying revelation that U.S. soldiers had massacred more than 400 unarmed civilians in the village of My Lai in March 1968. Moreover in 1970, Nixon announced that U.S. troops will attack enemy locations in Cambodia. This news sparks nationwide protests, especially on college campuses.

In 1972, the North Vietnamese cross the demilitarized zone (DMZ) at the 17th parallel to attack South Vietnam in what became known as the “Easter Offensive.” This led to a cease-fire signed in 1973 (Paris Peace Accords) and in March, the last U.S. troops are withdrawn from Vietnam.

In 1976, Vietnam is unified as a communist country, the Socialist Republic of Vietnam.

Why was the USA defeated?

This was due to a combination of American weaknesses and Vietcong strengths:

The tunnels of Củ Chi are an immense network of connecting underground tunnels located near Saigon and are part of a much larger network of tunnels that underlie much of the country. These tunnels were the location of several military campaigns during the Vietnam War, and were the Viet Cong’s base of operations for the Tết Offensive in 1968. The tunnels were used by Viet Cong guerrillas as hiding spots during combat, as well as serving as communication and supply routes, hospitals, food and weapon caches and living quarters for numerous guerrilla fighters. The tunnel systems were of great importance to the Viet Cong in their resistance to American forces, and helped achieve ultimate military success. 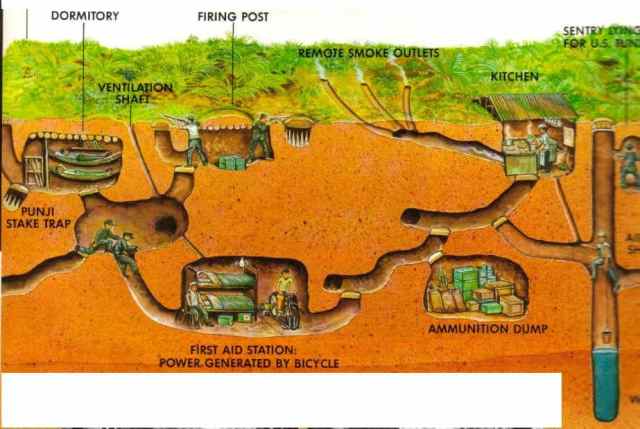 Results of the war

In the United States, the effects of the Vietnam War would linger long after the last troops returned home. Failure is a hard word, and no matter how you analyze the Vietnam War, that is exactly what it was.  The War was a personal failure on a national scale.  From its covert beginnings, through the bloodiest, darkest days and finally to the bitter end, this ten-year period of American history is a national disgrace.

The nation spent more than $120 billion on the conflict in Vietnam from 1965-73; this massive spending led to widespread inflation, exacerbated by a worldwide oil crisis in 1973 and skyrocketing fuel prices. Many returning veterans faced negative reactions from both opponents of the war (who viewed them as having killed innocent civilians) and from its supporters (who saw them as having lost the war), along with physical damage including the effects of exposure to the harmful chemical herbicide. Some 700,000 veterans suffered psychological effects from fighting in the war. Psychologically, the effects ran even deeper. The war had pierced the myth of American invincibility.

Yes Messer is 3A: artist, activist and author.
View all posts by Yves Messer →
This entry was posted in 1963-1975: Vietnam War. Bookmark the permalink.
%d bloggers like this: